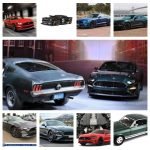 Originally designed from the platform of the second generation of the Ford Falcon the Ford Mustang debuted in 1962 as a 2 seat “concept” with a limited release in 1963 as a 4-seater to gauge public reaction. After numerous design and mechanical variants, the true introduction of the “Pony Car”  came in the 1965 Mustang which was… [Read More]